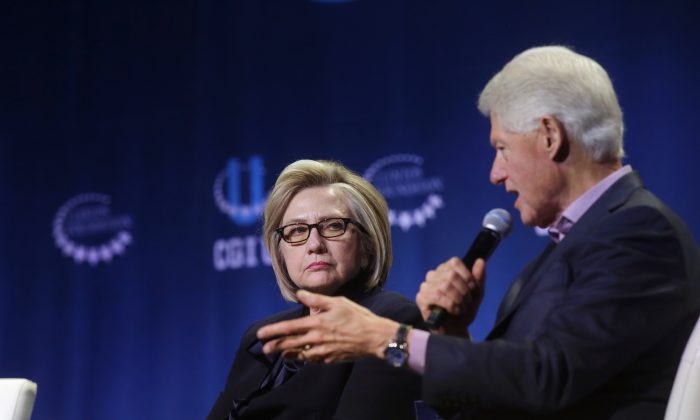 A new review by The Epoch Times has found that questionable payments to the Clinton family and its charitable projects dwarf the amounts of prior scandals in U.S. history, even after adjusting for inflation.

In all, the Clintons raised or were paid between $132 million and $147 million (between $150 million and $168 million when adjusted for inflation) from controversial, foreign-connected sources around the time of Hillary Clinton’s service as secretary of state and subsequent run for president.

This amount ranks above all other major scandals reviewed in the United States, dating back to the first special prosecutor more than 140 years ago.

Early Scandals
President Ulysses S. Grant appointed John B. Henderson as the first special prosecutor in June 1875, to investigate the so-called “Whiskey Ring,” in which public officials were siphoning off liquor tax revenue at a peak rate of over $1.5 million a year—$31.4 million in 2019 dollars—to campaign coffers and then their own pockets

Quickly, the indictments led to Grant’s own inner circle. Grant initially reacted by saying, “Let no guilty man escape if it can be avoided,” but when Henderson implied in a criminal proceeding that Grant was personally involved, Grant fired him and replaced him with James Broadhead.

Still, of the 238 individuals indicted in the Whiskey Ring case, 110 would be convicted, and more than $3 million of the stolen tax revenues recovered—$68.7 million adjusted for inflation.

Total revenue pocketed in the scandal is not known, but it does not appear to approach the total of questionable payments run up by the Clintons.

During the infamous Tea Pot Dome Scandal, then-Interior Secretary Albert B. Fall secretly leased exclusive rights to federal oil reserves, taking at least $300,000 in apparent bribes—$4.5 million in today’s dollars. In response, President Calvin Coolidge named two special prosecutors, one a Democrat and one a Republican, to avoid charges of partisanship. Though the dollar figures they uncovered associated with illegal leases themselves were much larger, the payments that actually inured directly to Fall’s interest did not even approach the scale of the Clinton scandal, even on an inflation-adjusted basis.

Watergate
After then-President Richard Nixon’s successful 1972 reelection bid, burglars allegedly linked to the CIA and Nixon’s White House were charged with breaking into the headquarters of the Democratic National Committee, then located in the Watergate Hotel.

During that time, the Nixon operation allegedly financed the burglars’ silence and support with $75,000 apparently drawn from the Committee to Reelect the President (CREEP), the President’s off-the-books “slush fund” that ultimately collected nearly $20 million in unreported funds, or over $120 million in inflation-adjusted dollars.

Iran-Contra and the Lewinsky Scandal
During the Reagan and Bush administrations, former Judge Lawrence Walsh ran up a $48 million tab (over $97 million adjusted for inflation) over seven years looking into allegations of secret arms sales to Iran and other redirected funds totaling about $7.5 million ($17.4 million adjusted for inflation) to aid the Contras, pro-American Nicaraguan rebels, in spite of a congressional prohibition on providing such aid.

Thus ironically, Walsh spent five times as much on the investigation as Reagan’s National Security Council provided to the Contras.

The scandal did not center on charges of personal enrichment.

In a similar way, though independent counsel Kenneth Starr was originally appointed to look into the Clintons’ failed Whitewater real estate investment scheme, on Sept. 9, 1998, Starr released his report on Bill Clinton’s relationship with Monica Lewinsky to Congress, containing 11 possible grounds for impeachment, but no allegations of financial corruption related to Whitewater.

Russian Interference in the 2016 Election
As previously reported, special counsel Robert Mueller’s indictment of 13 Russians alleged that the so-called Internet Research Agency budget devoted to U.S. election interference had risen to $1.25 million per month by September 2016.

However, Russian officials instructed their specialists in February to “use any opportunity to criticize Hillary and the rest (except Sanders and Trump—we support them),” not simply to support Trump.

Likewise, in June and July 2016, the indictment alleged, defendants set up a “Support Hillary. Save American Muslims” rally, including a sign reading, “I think Sharia Law will be a powerful new direction of freedom.”

The organization’s social media posts also encouraged blacks either not to vote or to support Jill Stein, according to the indictment. After the election, it alleged, the defendants set up rallies entitled both “show your support for President-elect Donald Trump” and “Trump is NOT my President” on the same date in the same place, as well as another called “Charlotte against Trump” in Charlotte, North Carolina.

Not only did these resources not flow directly to President Trump, but some were also actually directed against him.

On the domestic front, the Mueller investigation has run up a tab of $25 million, but it has also yielded approximately $48 million in revenue, mostly from Paul Manafort’s $42 million to $46 million asset forfeiture.

However, none of those resources were related directly to Russian interference in the 2016 elections. In fact, Mueller has yet to indict anyone for direct cooperation between Trump advisers and Russian officials.

Foreign Interference, for the Clintons
The dollar figures associated just with questionable foreign-related payments to the Clintons or their projects, many allegedly in return for policy-related favors, top all these other scandals from the annals of American history.

These sums should have reasonably figured into an investigation into Hillary Clinton’s unsecured home email server. The assumption that needs to be proven or disproven is that the email server existed to allow Secretary of State and presidential candidate Clinton to solicit donations for the Clinton Foundation and facilitate her family’s financial interests by cashing in on official decisions without leaving a record with the U.S. government.

For instance, according to The New York Times, Canadian businessman Frank Giustra gave more than $31 million to the Clinton Foundation the year after he acquired Kazakhstan-based uranium interests on a trip with former President Bill Clinton. The following year, Giustra’s company UrAsia merged with Uranium One, a South Africa-based company, and bought U.S.-based uranium interests.

Then, in 2009, Russia’s atomic energy agency Rosatom took a stake in Uranium One, including the U.S. uranium assets, in a deal approved by Hillary Clinton’s State Department. In 2010, Rosatom took a controlling stake, and then in 2013, bought the rest of the company—both also transactions requiring State Department signoff.

During this time, the Times found, the Clinton Foundation received an additional $2.35 million just from Giunta’s family, undisclosed in direct violation of an agreement with the White House, out of a total of $8 million linked to Uranium One, as the Russian agency acquired one-fifth of ongoing U.S. uranium production capacity in transactions approved in part by Hillary Clinton’s State Department.

Furthermore, former President Bill Clinton also received a $500,000 “payout” in 2010 from a Russian investment bank a few weeks after Mrs. Clinton’s State Department decided to oppose new sanctions on the bank’s officials, among others, for a speech he gave that generated a personal thank-you call from Vladimir Putin, according to The Wall Street Journal.

Moreover, The Washington Post reported, the Clinton Foundation received $1 million from Boeing, and former President Clinton received $250,000 as a speaking fee of which a proposed sub-sponsor was Boeing, around the time that “in a 2009 trip to Russia, Hillary Clinton made a personal pitch for a state-owned airline to buy Boeing jets.”

In addition, according to the Post, Saudi sources made contributions of between $10 million and $25 million to the Clinton Foundation in the lead-up to Hillary Clinton’s service in the State Department.

Likewise, the Algerian government gave $500,000 to the Clinton Foundation, at a time when the country was “spending heavily to lobby the State Department on human rights issues,” the Post reported.

A Guardian report likewise pointed to $81 million in Clinton Foundation contributions from owners of secretive, off-shore Swiss bank accounts. The donors included Jeffrey Epstein, the wealthy financier jailed for 13 months in 2008 for soliciting sex with underage girls. They also included Denise Rich, the ex-wife of the late billionaire and commodities trader Marc Rich, who fled to Switzerland in 1983 after being indicted by U.S. authorities for tax evasion, fraud, and racketeering, and who received a presidential pardon by Bill Clinton just hours before the former president left office in 2001.

These figures total between $132 million and $147 million (between $150 million and $168 million adjusted for inflation), some of it arguably in violation of the U.S. Constitution’s emoluments clause, and including at least one donation that flatly violated the Clinton Foundation’s ethics agreement with the Obama administration.

Christopher C. Hull holds a doctorate in Government from Georgetown University. He is president of Issue Management, Inc., distinguished senior fellow at the Gatestone Institute, senior fellow at Americans for Intelligence Reform, and author of “Grassroots Rules” (Stanford, 2007).