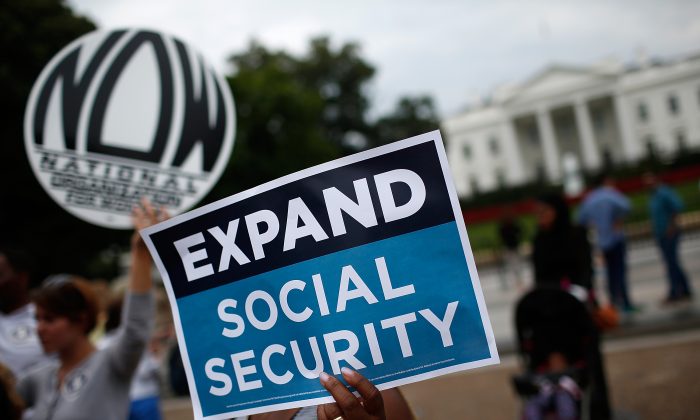 Activists participate in a rally urging the expansion of Social Security benefits in front of the White House in Washington on July 13, 2015. (Win McNamee/Getty Images)

WASHINGTON–The latest Social Security Trustees report finds that the program faces large shortfalls and is only a few years from insolvency, a group of experts agreed at a Capitol Hill event April 26.

Overall, according to Maya MacGuineas, president of the Committee for a Responsible Federal Budget (CRFB), the takeaway from the latest report is that, “We are running out of time to fix Social Security.”

“Every year that we ignore the Trustees’ warnings, every year that we wait and punt” on making the necessary changes to the program, she said, it increases the cost of fixing the system. Every year, the trustees say “Social Security is unsustainable,” MacGuineas said.

According to the report, she said, “The combined trust funds would only be able to pay full benefits up until 2035, at which point there will be an abrupt, across-the-board benefit cut for everybody of 20 percent” if the problem is not addressed. The Trustees report reinforces that the imbalances that cause the problem are “large and rising every single year,” given Social Security’s demographics and structure, she said.

Better Economy
On the other hand, MacGuiness suggested, there is some good news this year: the disability portion of the Social Security system has significantly longer until those trust funds fall short than reported in the past. The change took place in part because “more people are staying in the work force” with the improved economy, she said.

Jason Fichtner, former acting deputy commissioner of Social Security, agreed, saying, “in general, this is a better report than we’ve had in previous years.”

Fichtner said it is important to remember that trust fund insolvency is not the same as “going bankrupt.” Millenials, Fichtner pointed out, tend to believe the program will not be there for them. Social Security is actually highly likely to exist in some form when Millenials reach retirement, he said. Yet once its trust funds are depleted, Fichtner emphasized, Social Security will only be able to pay out in benefits what it takes in in payroll tax revenue, “which is basically enough to cover 80 percent” of benefits as they are currently structured.

In addition, Fichtner said, the total cost of the program in 2018 grew to a towering $1 trillion, or “one thousand billion dollars,” as the report describes it. “That’s real money,” he said, and it has a real impact on seniors and the economy, so we cannot afford to ignore it.

Fichtner also agreed with MacGuineas that the longer policymakers wait to heal the program’s ailments, the harder it will be to heal them, and the more painful the impact will be when they finally do.

Finally, Fichtner argued, though the disability insurance trust fund showed a startling 20-year improvement in its projected insolvency from the prior year, “we don’t have three decades to fix” it. Its position improved because the economy improved, he said, but as soon as the United States has another recession, “that program’s going to face severe financial trouble.” Accordingly, he recommended, policymakers should use the “bandwidth” provided by the economy’s improvement to address the underlying problems within the disability program.

Retirement Security
When addressing those underlying problems in the Social Security program more generally, Marc Goldwein, vice-president of CFRB, suggested, policymakers should focus on improving Americans’ retirement security, not just fiscal balance for the program. For instance, he pointed out, many wealthy retirees receiving benefits are well into the spectrum of financial security, while many lower income retirees are off that spectrum, not getting the benefits they need.

Moreover, Goldwein argued, policymakers should remember to factor in economic growth to their Social Security reforms. One reason, he said, is that improvements in the program’s health this year are due in part to healthy rates of economic growth, over 3 percent in the most recent economic news, while an aging population suggests that America is more likely to grow at about 2 percent over time.

Thus, said Goldwein, to the extent Social Security can send workers signals that grow the economy, it will in turn improve the program’s health. For instance, raising the retirement age slowly over time and with adequate notice not only saves resources in Social Security, but encourages workers to remain in the workforce, which in turn improves their longevity and wellbeing and economic growth as well, thereby strengthening the program indirectly.

Likewise, Goldwein flagged “idiosyncrasies” in the Social Security program that discouraged work. For instance, he said, in the last few years of work, workers accumulate little additional Social Security benefits for their retirement, while in the first few years of work, the benefits accumulate very rapidly. According to Goldwein, policymakers need to flip that around to reward working longer when it is challenging to do so, not at the beginning of a career when virtually no workers consider retirement.

Finally, legislation and regulation to address the disability program’s problems, Goldwein underscored, also played a role in the insurance program’s improvement, including reallocation of funds within the program and getting under control the worst-acting Administrative Law Judges (ALJs), who were approving dramatically more applications than others, including higher numbers allegedly driven by fraud.

The Trustees’ “best guess,” Goldwein said, was that though the strong economy had led to more and more of those qualifying for disability staying in the work force, some of the improvement in the program’s outlook was structural. The “bad news,” said Goldwein, was that if in fact more of the improvement was economic than Trustees believed, the disability insurance program would deteriorate more quickly than expected were the economy to slow.

Ben Ritz of the Progressive Policy Institute said policymakers had not actually made significant financial improvements to the program.

When it is time to make such improvements, Ritz recommended “keeping in mind that when we raise taxes…those are tax dollars we could be using for other programs.” Likewise, Ritz asserted that to the extent benefit cuts take beneficiaries below the poverty line, “we have other areas of the federal budget that are going to have to pick up that slack.”

Asked by The Epoch Times about the potential for “means testing” Social Security, Fichtner said Social Security already includes a “back door means test.” He noted, “When people hear ‘means testing’ they think we’re going to reduce your benefits because you make income.”

Instead, he pointed out, for certain people who have over a particular level of gross income, “we tax your Social Security benefits up to 85 percent.” One of the proposals to increase revenue, Fichtner noted, would be to make 100 percent of benefits taxable for higher-income filers. Should we increase that level, Fichtner asked? “Probably,” because those most able to afford changes in the Social Security program are precisely those making additional income in any given year.

The event, “Unpacking the Social Security Trustees’ Report,” was sponsored by CRFB.