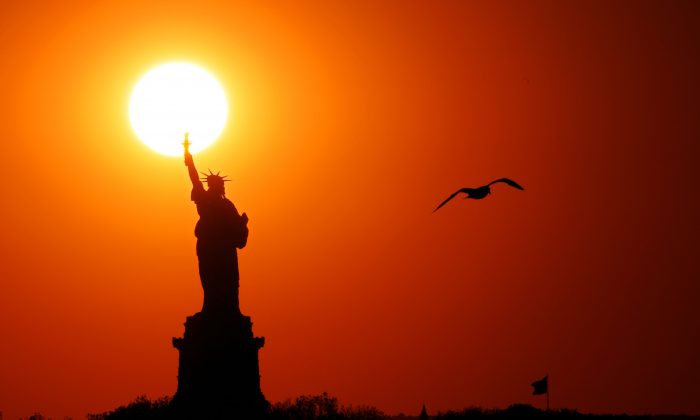 The sun sets behind the Statue of Liberty in New York City on June 02, 2017. (Michael Heiman/Getty Images)

The New York Times is once again leading a movement for the Democratic Party and the left in a direct attack on the exceptionalism of the United States.

One of the basic tenets of this latest attack against the United States is that the wealth that exists here was stolen from the world and made off the backs of slaves.

This whole concept is devoid of intellectual honesty, demonstrably false, and clearly politically motivated going into the upcoming presidential election.

The New York Times backs the Democratic Party, and in this particular election cycle, they hate President Donald Trump to boot, so they’re particularly motivated and seem to have lost what little sense they had.

The United States is where it is because of American self-reliance and hard work. That said, we do have one thing that no one else has, which is a function of that same self-reliance: a system that allows the little guy to get ahead.

Our right to bear arms and defend ourselves, and our proud independence of spirit, makes us fight to get ahead and keep what we’ve earned. In many other countries, the little guy would have to make payoffs or receive permission from a higher-up to even attempt to start a new business or take advantage of a commercial idea or service. That stifles the energy and creativity of the population.

In the United States, that freedom is a given, and it has unleashed more than 200 years of creativity and hard work at every level of society, which created the wealth of this country. That’s the real source of our success and a good part of the greatness in the United States.

Repeatedly today, and commonly in our history, we see stories of people with nothing who have a great idea or put in a supreme effort and become wildly successful and/or wealthy. That’s a greatness and freedom you just don’t often find in many parts of the world.

First, even the most rudimentary research confirms the vast majority of the wealth in the United States was made long after slavery ended. Additionally, slavery was used as an integral part of the agricultural South, ruled by the Democratic Party in the days when cotton was king.

In the closing days of the Civil War, the entire economy of the South was virtually destroyed, and any remaining wealth accumulated through slavery was finished by Maj. Gen. William Tecumseh Sherman’s March to the Sea, which implemented a total scorched earth policy. This path of destruction cut through the heart of the South and was the fatal blow to the region’s economy and plans for independence. They surrendered shortly after.

After the loss of the Civil War, the Ku Klux Klan served as the action arm of the Democratic Party, continuing its fight for segregation and racism—a very sad and shameful example from our history, the ramifications of which play forward even today. Maybe this is one of the reasons so little history is taught in public schools in this day and age, since it proves false so many claims of the Democratic Party and the left.

There are other examples of when the United States was less than perfect, such as the treatment of the tribes that are native to North America.

I myself am a card-carrying member of the Cherokee nation, and my great grandparents were taken from their home and force-marched on the Trail of Tears to the reservation in Oklahoma. No one knows the exact number of Cherokees who died during the forced march, but a middle-of-the-road estimate is that 25 percent of the people died along the way. The person who ordered the forced eviction and exile to a reservation in Oklahoma was the Democrat president at the time, Andrew Jackson.

While it’s debated whether Jackson truly hated Native Americans, through his actions, he was clearly an extreme racist who didn’t care whether Indians died. While Democrats aren’t exclusively to blame for how the Indians were treated, Jackson is the perfect historical example of someone who achieved greatness, but also did things that were terrible.

We are all less than perfect because, after all, we are only human. However, our mistakes do not alone define us.

Yes, The New York Times can point out things we as a nation have done wrong, but the good that the United States has done outweighs any mistakes a thousand times over. Yes, we had slavery, but the United States did and has done more in the world to end slavery than anyone else. For those countries and people that have lived under the cruel yoke of socialism and communism following World War II, the United States has always been the beacon of light on the hill, which it remains today.

Rather than falsely accept the blame for the ills of the world as The New York Times would have us believe, and give away money to the world out of guilt, we need to export the ideals that made us exceptional. All of the people of the world should be free to pursue their individual dreams and goals through creativity and hard work.

I recommend the First and Second amendments to the Constitution of the United States as a great start; that is, free speech and the right to bear arms. It’s no accident the founders made those the first two.

The opportunity to succeed is not a guarantee of success, but more people will generate more wealth and social justice this way than in any other.