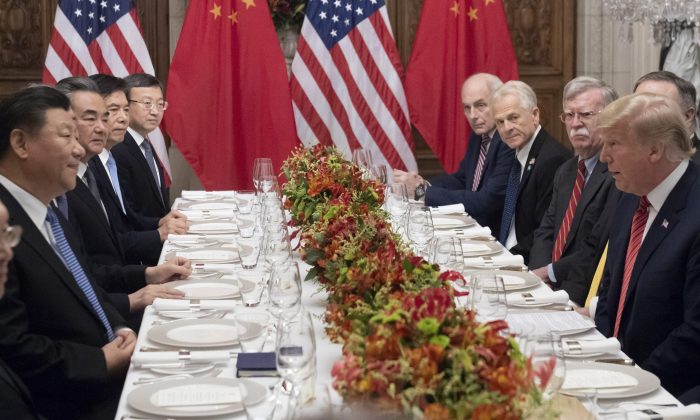 U.S. President Donald Trump (R) and China’s President Xi Jinping (L) along with members of their delegations, hold a dinner meeting at the end of the G20 Leaders’ Summit in Buenos Aires, on December 01, 2018. – US President Donald Trump and his Chinese counterpart Xi Jinping had the future of their trade dispute — and broader rivalry between the world’s two top economies — on the menu at a high-stakes dinner Saturday. (Saul Loeb/AFP/Getty Images)

In a completely unexpected turn of events, China’s Ministry of Finance recently announced its plan to suspend tariffs on 16 types of U.S. products.

This 180-degree policy shift by Beijing is by no means an accident or change of heart. It’s because of a calculated and hard-nosed trade strategy championed by the experienced negotiator President Donald Trump.

The United States is now clearly winning the standoff with China and, for the first time in modern history, is making progress on trade agreements that are finally beginning to resemble something approaching fair.

Beijing has blinked first and is still reeling as Trump continues to ratchet up the pressure on the Chinese economy. Significantly, and revealing of the Chinese desire to lower trade tensions, some of the exempted items will also be “refundable.” In other words, the Chinese government will reimburse companies for tariffs they’ve already paid on those products.

China also is retroactively reducing some tariffs that it previously imposed, in response to Trump’s economic pressure campaign. In a culture in which saving face is fundamentally important, a reversal of this sort is a difficult step to take for the Chinese government, and an indicator that they’re still struggling to better understand how to deal with Trump.

U.S. officials are also expected to resume trade negotiations with China early next month. Beijing’s tariff capitulation suggests that China’s leaders are feeling the squeeze and growing eager to reach a bilateral trade deal with the White House. In fact, just one day after China’s tariff suspension, the president revealed that our adversary is expected to start purchasing “large amounts” of U.S. agricultural products: another significant about-face on the part of the Chinese.

Of course, Beijing’s recent overtures to Washington are not acts of benevolence, but of desperation. Trump has applied steady pressure on China throughout his presidency, imposing strategic counter-tariffs in retaliation for China’s decades of trade abuses, and has then gradually escalated those tariffs whenever the communist regime has reneged on its previous commitments. China has used the vast profits from unfair trade practices to fund many of its nefarious destabilizing activities and remains the largest long-term national security threat to the United States.

The president’s strategy has been steadily eroding the Chinese government’s confidence in its own economy, with numerous reports suggesting that the regime’s leaders were already expressing concerns about the impact of Trump’s strategic tariffs as far back as August 2018. Their worst fears were quickly realized as China’s decades-long economic expansion started to falter for the first time. In the second quarter of this year, for instance, China posted its slowest GDP growth rate in nearly 30 years.

China is well known to manipulate the economic numbers it publicly reports, and the true state of the Chinese economy is almost certainly far worse than the official data indicate. Even China’s food market has taken a major hit from U.S. tariffs in recent months, with overall food costs increasing by about 10 percent over the past year. The price of pork has risen by a staggering 50 percent over the same time period, although that’s largely due to a shortage caused by an outbreak of African swine fever.

While Trump’s counter-tariffs are most certainly putting immense pressure on Beijing to negotiate a genuinely fair trade deal with the United States, the real knockout punch to Beijing’s aggressive aspirations has been the ongoing economic boom here in the United States, which has taken place despite the so-called trade war.

In contrast to China’s growing economic crisis, the U.S. economy has been steadily expanding for the past two and a half years, creating more than 6 million new jobs since Trump took office. As a result, the U.S. unemployment rate recently hit a 50-year low, and the tight labor market has produced the biggest wage gains for U.S. workers in more than a decade, along with the lowest poverty rates ever recorded among blacks and Hispanics.

China can’t hope to go toe-to-toe with the United States on trade in the face of this stark economic imbalance, and its recent retreat on tariffs is clear evidence that the communist regime is well aware of that fact.

Trump has stated publicly all along that the United States holds all the cards in these negotiations, and once again, he’s been proven right.