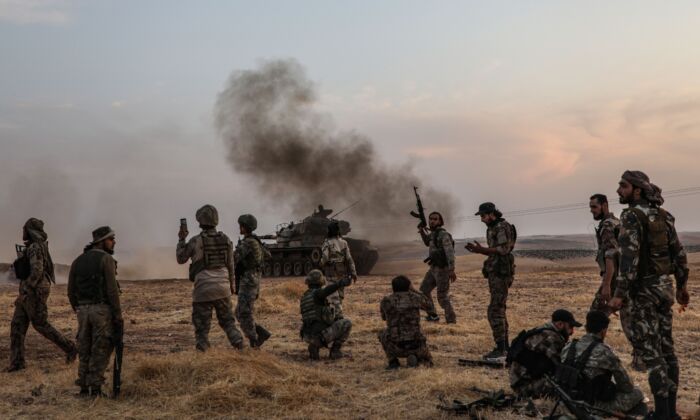 Turkish soldiers and Turkey-backed Syrian fighters gather on the northern outskirts of the Syrian city of Manbij near the Turkish border on October 14, 2019. (Zein Al Rifai/AFP via Getty Images)

Since coming to power in 2014, Turkish President Recep Tayyip Erdogan has ruthlessly consolidated his power and control over every aspect of Turkish life.

As a result, there are tens of thousands of Turkish refugees living in exile and several thousand political prisoners still held in Turkish prisons.

Human rights abuses are, in fact, one of the main reasons Turkey is no longer in negotiations to be considered for European Union membership.

Concurrently, under Erdogan, Turkey has enjoyed an interesting and dangerous rapprochement with Iran, particularly during the past few years. Traditionally, Turkey and Iran have been diametrically opposed regimes and relations were rife with challenges. However, in recent years, Turkey and Iran have established a mutually beneficial relationship, and Turkey has been supportive of Iran’s Middle East policy.

For example, in Syria, Turkey has shown support for Iran in the Astana peace process, and again in Iraq, during the crisis between Qatar and Saudi Arabia, and in the tripartite Iran–Russia–Turkey negotiations.

Turkey, under Erdogan, is strikingly similar to Iran in other ways, including Erdogan’s creation of paramilitary structures to safeguard the regime, support for proxy groups in other countries, and targeting of opponents (real and perceived) in Turkey and abroad. Targeting the opposition abroad is a common tactic that the Iranian regime has used extensively and for many years.

Kidnappings and disappearances by Turkey’s National Intelligence Agency (MIT), headed by Hakan Fidan, have become all too common. Fidan, who became the head of the MIT in 2010, is well known as a pro-Iranian Islamist and yet is a close confidant of Erdogan. According to public comments by Israeli intelligence, Fidan “played a central role in tightening Turkish ties with Iran.”

The United States has imposed severe sanctions on Iran, which produced unintended consequences for the budding Erdogan–Iran relations. With regard to Iran, which has been facing U.S. sanctions for many years, Erdogan has demonstrated a willingness to undermine U.S. policy on Iran throughout his tenure by opposing United Nations sanctions against Iran and by working jointly with Iran to avoid the U.S. sanctions.

According to a 2017 Southern District Court of New York indictment, Reza Zarrab, an Iranian/Azeri businessman who also held Turkish citizenship, and his associates at Halkbank, a large Turkish state-owned company, were charged with allegedly “conspiring to use the U.S. financial system to conduct hundreds of millions of dollars’ worth of transactions on behalf of the Government of Iran and other Iranian entities.”

Mehmet Hakan Atilla, the deputy head of Halkbank, was arrested and specifically charged with conspiring to evade sanctions against Iran, for allegedly using “U.S. financial institutions to engage in prohibited financial transactions that illegally funneled millions of dollars to Iran.”

With the pullback of U.S. troops posted in Syria, an aspect of the situation has pivoted and a window into the reality of what Turkey has become under Erdogan has been opened to scrutiny.

Turkey has invaded northern Syria, plain and simple; Russians have greatly expanded their influence, Kurdish allies and Christians are being hunted down and exterminated, U.S. troops are being fired upon as they pull out of the area, and regional political figures are being assassinated.

Turkey has joined the ranks of Russia and Iran in the desire to use force and coercion to re-conquer lands they controlled at some period in history or expand their control and influence. We’ve seen this with the Russians in Ukraine, and Iran has long tried to control the surrounding region; now Turkey has joined their ranks. This is a naked grab for power and, make no mistake, this is part of Erdogan’s long-term strategy to re-establish a modern-day version of the Ottoman empire, with him at the helm.

As a result, President Donald Trump faces the first real challenge in his presidency. The unending, unreasonable, and possibly illegal political attacks by the left have been shrugged off by the president like water off a duck’s back. The negotiations with countries that are famously difficult to deal with, such as China, have been child’s play for the master negotiator we have in Trump.

Now, however, Trump faces an actual challenge that will be a measure of his true capabilities and will certainly form at least a part of his legacy.

The situation in Syria has blown up in his face and he has ordered sanctions be imposed on Turkey. I sincerely hope that works, but it’s hard to believe sanctions will be enough. This is going to be a difficult situation to resolve, but I do have one piece of advice for the president: be bold. Toujours de l’audace.