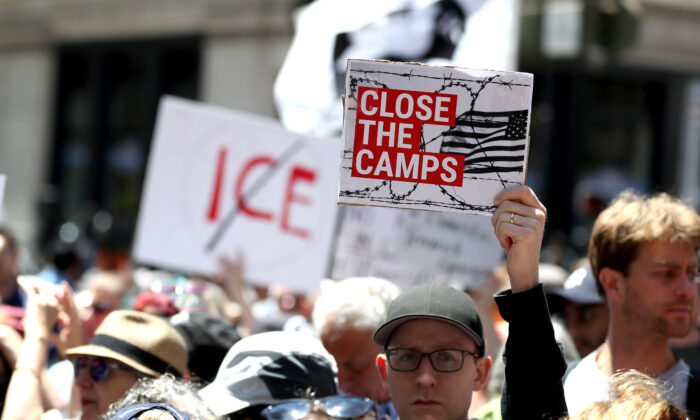 WASHINGTON–Armed perpetrators who shot at Immigration and Customs Enforcement (ICE) offices in San Antonio in mid-August conducted a “targeted attack,” according to the FBI, drawing the ire of the office’s director, who said increasingly incendiary political charges “encourage these violent acts.”

While no one was injured in the attack, “had the bullets gone two inches in another direction, we could be here today talking about the murder of a federal official,” FBI Special Agent in Charge Christopher Combs said.

On June 17 in an Instagram video, Rep. Alexandria Ocasio-Cortez (D-N.Y.) said, “The fact that concentration camps are now an institutionalized practice in the home of the free is extraordinarily disturbing, and we need to do something about it.”

“I don’t use those words to just throw bombs,” she added.

Morgan noted that “there is so much oversight in these facilities,” including inspector general and nongovernment organization reports.

“I encourage the check and balance, I encourage inspections,” he added. “If you go to these facilities … there will be safe and adequate conditions to detain individuals.”

U.S. Rep. Liz Cheney (R-Wyo.) echoed Morgan’s critique, tweeting at Ocasio-Cortez: “Do us all a favor and spend just a few minutes learning some actual history. 6 million Jews were exterminated in the Holocaust. You demean their memory and disgrace yourself with comments like this. ”

On June 20, Dominik Tarczinski, a member of Poland’s Parliament, wrote, “I am formally inviting [Rep. Ocasio-Cortez] to come to Poland, where Adolf Hitler set up the worst chain of concentration camps the world has ever seen, so that she may see that scoring political points with enflamed rhetoric is unacceptable in our contemporary Western societies.”

By early July, “#OccupyICE” protestors set up encampments outside official facilities in Philadelphia, New York City, Atlanta, Los Angeles, Detroit, and Portland, Oregon. On July 12, a mob of protestors purporting to “Close the Concentration Camps,” including one wearing a “Make America Mexico Again” shirt, descended on an ICE facility in Aurora, Colorado.

One protestor pulled down a U.S. flag and raised a Mexican one in its place; an outlet reported anonymous individuals took down flags for Colorado, the United States, and the contractor that runs the facility, GEO Group.

“The three flags were placed on the ground in the center of the large circle of people as they chanted ‘one, two, three, four, genocide, slavery, war, five, six, seven, eight, America was never great!’” the outlet reported.

Two days later, Willem Van Spronsen, who used concentration camp rhetoric in his manifesto, stormed a Tacoma, Washington, ICE center armed with a rifle and “incendiary devices,” and was fatally shot by police. Van Spronsen attempted to ignite a propane tank on the premises in order to burn down the facility.

Nine Slain in Dayton
Early in the morning of Aug. 4, in Dayton, Ohio, Connor Betts, who “definitely leaned to the left,” according to the Dayton Daily News, fired 41 shots in less than 30 seconds, slaying nine people, including his sister, before he was shot and killed by police. According to CNN, Betts “retweeted extreme left-wing and anti-police posts, as well as tweets supporting Antifa.”

In particular, Betts retweeted posts condemning ICE agents, including one that said, “these people are monsters,” as well as multiple posts critical of police and supporting Antifa protesters, “who often use violent tactics.”

In addition, Betts shared a June 26 post misapplying the term “concentration camp” six separate times to federal detention facilities, including the erroneous quote, “Most of the historians who study these things seem to be calling them concentration camps.”

Trump’s Decapitated Head
Some have attributed the ratcheting-up of violent rhetoric and resulting attacks to President Donald Trump’s arrival on the political scene.

Trump’s critics have likewise come in for criticism, such as Snoop Dogg, who shot a video featuring him pretending to shoot a clown dressed like Trump. Comedian Kathy Griffin apologized after distributing images of herself with what appeared to be the president’s decapitated, bloody head. And New York’s Public Theater reportedly lost advertisers over a production of Shakespeare’s “Julius Caesar” that featured the murder of a “Trump lookalike.”

After a leftist domestic terrorist shot a number of victims including then-House Majority Whip Steve Scalise (D-La.) during a Republican congressional baseball practice in 2017, Rep. Rodney Davis (R-Ill.) stated, “I believe there is such a hatefulness in what we see in American politics and policy discussions right now … on social media and the 24-hour news cycle. This has got to stop.”

At the time, journalist Kristin Roberts said, “Media owns part of this increase in violent rhetoric. … When pols criticize each other, they are not ‘blasting,’ ‘shooting down,’ ‘pummeling.’”