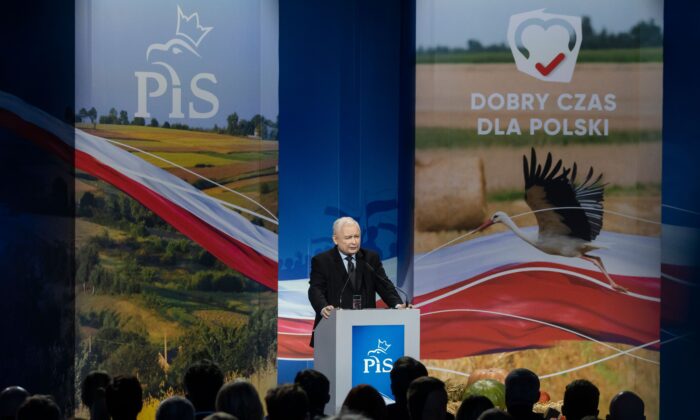 Elections in Poland and Hungary on Oct. 13 delivered mixed results, with the ruling patriotic conservative parties expanding support in the former, but losing some high-profile mayoral races in the latter.

Winning in Warsaw
“We have victory,” Jaroslaw Kaczynski, the leader of Poland’s ruling Law and Justice Party (known by its Polish acronym, PiS), announced to supporters at the party’s Warsaw headquarters. “We have four years of hard work ahead. Poland must change more, and it must change for the better.”

Member of Parliament Dominik Tarczynski, who was reelected to the Polish Diet and, at such time as Brexit takes place, is set to take a seat in the European Parliament as well—and is in “cold storage” until then—likewise told The Epoch Times that the election result was “so great.”

“People are happy,” he said.

At least one Pole interviewed by an international outlet agreed. “There is no comparison to previous years,” a Polish pensioner commented in the leadup to the election. “It has been the best time for Poland now—the best in 30 years.”

PiS notched nearly 44 percent of votes cast, the highest percentage since democracy was restored in 1989. Results, with 99 percent of voting districts released Oct. 14, suggest PiS will increase its majority in the 460-seat Diet, or lower house, to 239 members from the 231 they had before the election. The party gained 2 million extra voters.

Reports varied as to whether PiS would retain control of the relatively powerless Senate. The Washington Post reported that “populists in Eastern Europe looked shaken on Monday, after … Poland’s ruling party lost control of the Senate.”

But Tarczynski flatly denied that control of the Senate was settled, with the seat count at 49–49. He said PiS is in discussions with the three independents to see if the party can maintain control.

“We’ll see,” said Tarczynski, who believes PiS will retain control of the Senate as well. “I think it’s going to be good.”

Delivering on Promises
According to Adam Easton of BBC News Warsaw, “Law and Justice now has a reputation of a party that delivers on its promises.”

For instance, Easton noted, PiS pledged to continue to advance judiciary reforms, which the party argues moves away from the Soviet-era apparatchiks that still preside in courtrooms 30 years after the fall of the Berlin Wall.

The European Commission, whose new leader recently came under fire for supporting a “centralized, undemocratic, updated form of communism,” announced last week that it would take Poland to the EU’s top court over recently enacted rules to discipline judges. A year ago, the EU ordered Poland to halt application of a law reducing the retirement age on the Polish supreme court, a measure taken in order to “remove judges appointed during the communist era,” the Polish government said.

Asked about this contention, Tarczynski said: “It’s true. If you look at the names [of those currently in the Polish judiciary], you will find people who were deciding cases against members of Solidarity in 1981.”

The same individuals who governed during martial law under communist rule when his then-pregnant mother was beaten for venturing outside the house are still in power in the judiciary, Tarczynski said. He insisted they must be ousted. “It’s outrageous that they are still in place.”

Tarczynski said the EU’s claims about Polish judges are analogous to those leveled against President Donald Trump.

“‘He’s breaking the rules.’ That’s words, not facts. They call us ‘nationalists.’ They can call us an elephant—I don’t care. Rule of law is on our side. Democracy is on our side.” Like Trump, Tarczynski said, members of the PiS party would simply “do our jobs.”

In addition to moving forward with promised judicial reforms, Easton said, “the party has reaped the rewards of its generous welfare scheme, which has benefited millions of families.” The new program, which pays families around $130 per child per month, acts as an incentive for families to have more children, an attempt to counter the “doom loop“ of decreased fecundity plaguing the West.

Tarczynski said that PiS’s baby benefit, as originally enacted, applied only to the second and third child.

“Now it is for the first child as well,” he said. “It has been very important.” Specifically, he said, Poland’s economic growth proves that the benefit is working as intended. For instance, he noted that Polish unemployment has reached historic lows; independent data indeed suggests that rate is approaching a 30-year low.

In addition, Tarczynski pointed to GDP growth that ranks fourth in the EU—behind Hungary, which ranks second in the bloc, according to independent data, given that while tiny Moldova’s growth rate technically exceeds both, the former Romanian province has yet to formally enter the EU as a separate country.

During the campaign, PiS chief Kaczynski underscored the importance of traditional families.

“We are dealing with a direct attack on the family and children,” he said, “the sexualization of children, that entire LBGT movement.” Poland’s bishops have warned Poles of the dangers of “LGBT ideology,” and municipalities have set up “LGBT-free zones.”

“This is imported,” Kaczynski said, “but they, today, actually threaten our identity, our nation, its continuation, and therefore the Polish state.”

The party will work to see that “no one in Poland will doubt what we are doing is good, realistic and responsible,” Kaczynski said to supporters after the elections.

Orban ‘Ready to Cooperate’
In Hungary, the ruling Fidesz party, which has won every major election since 2010, continued to dominate in smaller cities and rural areas. That said, voters elected an opposition candidate mayor of Budapest, Hungary’s capital, as well as in 10 of the country’s 23 largest cities, where in 2014, opposition figures won just three races.

“We take note of this result,” Hungarian Prime Minister Viktor Orban said. “All we can say is that we are ready to cooperate in the interests of the people living in the country and in Budapest.”

Personal scandals rocked the 2019 mayoral elections, including sex tapes featuring two mayors, one from Fidesz, Zsolt Borkai, and one from the opposition, Tamas Wittinghoff, though both men won their races.

Both Countries Rated ‘Free’
In the most recent year available, U.S.-based rights watchdog Freedom House rated Hungary at 70 and Poland at 85 in its survey of global political rights and civil liberties, classifying both countries as “free,” but delivering both lower ratings, in part because the organization defines “freedom” as including abortion, same-sex marriage, and alternative sexual practices.

Requests for comment from the Polish and Hungarian governments weren’t immediately returned.