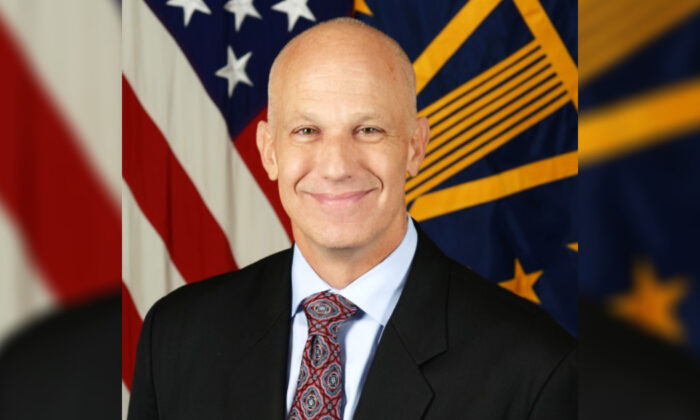 The Obama holdover heading the Pentagon office reportedly under investigation by the U.S. attorney who is conducting the criminal probe of the Trump–Russia investigation was accused of leaking a classified document, in a recent court filing for retired Lt. Gen. Michael Flynn.

The connection hasn’t been previously reported.

According to a Nov. 21 report by independent journalist Sara Carter, U.S. Attorney John Durham is questioning personnel in the Pentagon’s Office of Net Assessment (ONA). ONA awarded about $1 million in contracts to FBI informant Stefan Halper, who appears to have played a key role in alleged U.S. intelligence agency spying on 2016 Trump campaign advisers Carter Page and George Papadopoulos.

In addition, however, a court filing indicates that ONA’s director, James H. Baker, “is believed to be the person who illegally leaked the transcript of Mr. Flynn’s calls” to The Washington Post. Specifically, the filing states, “ONA Director Baker regularly lunched with Washington Post Reporter David Ignatius.”

The filing adds that Baker “was Halper’s ‘handler’” at ONA. Moreover, according to the court filing, the tasks assigned to “known long-time operative for the CIA/FBI” Halper “seem to have included slandering Mr. Flynn with accusations of having an affair with a young professor (a British national of Russian descent).”

Baker didn’t respond to a request for comment by The Epoch Times as of press time.

The filing notes that Flynn’s defense team has requested phone records for then-Director of National Intelligence James Clapper, likewise in order to confirm contacts with Ignatius. The filing singles out records for Jan. 10, 2017, when, according to the filing, “Clapper told Ignatius in words to the effect of ‘take the kill shot on Flynn.’”

Clapper didn’t respond to a request for comment by The Epoch Times as of press time.

Acting Pentagon Inspector General Glenn A. Fine in November 2017 started an investigation into charges that Baker retaliated against a whistleblower who red-flagged “rigged” contracts, including Halper’s. Another $11 million in contracts under scrutiny went to the Long Term Strategy Group (LTSG), which is run by a schoolmate of Chelsea Clinton, whom she has referred to as her “best friend.”

According to the whistleblower’s attorney, “Baker’s interest was his awareness of the LTSG-Clinton connection; his presumptive desire to exploit that to his advantage in the event of a Clinton election win; and the fact that contractors like LTSG served as a lucrative landing pad for ONA retirees.”

The attorney charged that Baker’s claims about the whistleblower were “demonstrably false,” calling Baker “partisan and highly vindictive.”

At the time, Richard Perle, Ronald Reagan’s former Assistant Secretary of Defense, called Baker “a shallow and manipulative character that should have gone with the change in administration.” Perle further charged that the whistleblower “clearly was the target, for political reasons, of an effort to push him out of government,” saying “he’s a Trump loyalist, and it was launched and sustained by an Obama holdover.”

That inquiry is being carried out by the inspector general’s Investigations of Senior Officials Directorate.

Raising additional questions, a 2016 report further revealed that the ONA had failed to produce the top-secret net assessments the office was established to conduct for more than 10 years, even with a yearly budget approaching $20 million.

Baker was named as ONA director on May 14, 2015, during the Obama administration. A contemporaneous report called his appointment “part of a wave of new Pentagon personnel moves in recent days, senior-level officials who will outlast President Obama’s final term in office.” Baker replaced Andrew W. Marshall, nicknamed “Yoda” for his “wizened appearance, fanatical following in defense circles, and enigmatic nature.” Obama Defense Secretary Ash Carter, in selecting Baker, “passed over several of Marshall’s acolytes who were in the running for the position.”

Jacqueline Deal, president of LTSG, wrote in an email to The Epoch Times: “My colleagues and I began performing work in support of the Office of Net Assessment during the George W. Bush administration, over a decade before the office’s current director was appointed. … None of the awards received by LTSG from the Department of Defense resulted directly or indirectly from the actions or influence of Secretary [Hillary] Clinton. Any statement or implication otherwise is false.”