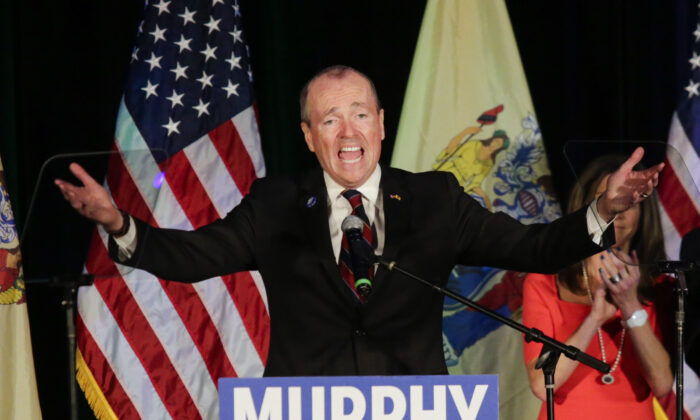 The Democratic Party’s open borders policies and rhetoric are generating a building bipartisan backlash across the country, costing their proponents support even in heavily Democratic areas, among prominent Democratic candidates, and within core Democratic constituencies.

Hoboken’s City Baptist Church Pastor Philip Rizzo told The Epoch Times, “As the U.S. State Department and international organizations like the United Nations have noted over and over again, porous borders facilitate the trafficking of human beings—including the sex trafficking of women and children—and narcotics, including opioids, and illegal firearms.”

On Oct. 11, the state’s Monmouth County took steps toward suing over the scheme. County sheriff Shaun Golden told NJTV, “we do not recall a directive that has ever been issued to ignore the laws of this country or state. As a result, we shall continue to pursue legal remedies to this directive.”

Likewise, Cape May County is considering legal action, after its sheriff, Robert Nolan, flatly refused to cease cooperation with federal authorities, telling NJTV, “I’ve never before been asked not to cooperate with another law enforcement agency, not one time in the 35 years I have been working in law enforcement.” Nolan said he planned “to take this matter to court and I will take any avenue available to me to protect the residents of our County.”

Ocean County already launched a lawsuit late last month, and Sussex County successfully placed an initiative on its Fall ballot asking whether its sheriff should be authorized to “ignore directives from state officers and agencies” about “undocumented migrants illegally residing“ in the United States, and hired legal representation to defend the initiative.

The counties are reacting not just to the Murphy Administration’s ever-more aggressive attempts to enforce its policies, but to escalating reports those policies are leading to the release of potentially dangerous illegal alien criminals. Earlier this year, federal immigration officials in the state announced that 90 percent of the 123 foreign nationals arrested by agents in a month-long operation had prior criminal convictions and/or pending criminal charges.

He remains at large.

The fracas has cost Democrats at least one elected official, Mark Razzoli, who won local office as a Democrat but recently registered as a Republican and announced a bid for Congress. “From my perspective, I feel that the party left me,” he told the local news webite Patch. “It’s been hijacked by radical socialists whose priority is illegal immigration and an immigration policy that is dangerous to the American people.” The then-Democrat charged at a town council meeting that Gov. Murphy “thinks it’s acceptable to strong-arm local sheriffs into ignoring federal immigration laws.”

In an editorial, one local New Jersey paper decried the Murphy Administration’s “war against law enforcement cooperation when it involves illegal immigrants.”

By contrast, Rep. Ilhan Omar (D-Minn.) defended Rep. Ocasio-Cortez’ characterization, saying of the camps, “When you talk about the process of de-humanizing people so that you can exterminate them, there is a process.”

On July 7, Rep. Rashida Tlaib (D-Mich.) charged American detention centers are “absolutely” like concentration camps because of the “trauma” they cause illegal aliens.

But de Blasio pointed out, “You cannot compare—what the Nazis did in concentration camps, unfortunately, is without any historical—I mean, it’s a horrible moment in history. There is no way to compare.”

Jewish Activists Split on Use of ‘Never Again’
Moreover, representatives of the American Jewish community have disagreed publicly and vehemently about the use of Holocaust terminology to refer to federal immigration practices.

On July 16, the Immigration and Customs Enforcement (ICE) headquarters in D.C. was the site of a large protest by Jewish groups in which at least 10 people were arrested for unlawfully entering the building. One of the protesters held a poster that read, “Never again means now, Jews say close the camps,” including a photo of holocaust child victim Anne Frank. A tweet by an individual linked to the protests read, “Three streets around the ICE Hq in #dc, the front doors, and the parking garage were SHUTDOWN today!” The tweet included the hashtags #AbolishICE, #NeverAgain, and #CloseTheConcentrationCamps.

Likewise, on August 14 in Florida, protesters in Florida including from Jewish activist group Never Again Action threatened by name workers and former employees of a private contractor used by ICE. “We know where all your children live throughout the country … John Bulfin you have kids in [bleeped out], you have kids in [bleeped out],” one protester yelled. “We know everything about you and you won’t just be seeing us here.”

The Coalition for Jewish Values, which says it represents “over 1000 traditional rabbis in matters of public policy,” condemned the protest, saying the “event announcement refers to ‘Never Again’ and ‘deportation,’ a combination designed to evoke images of Jews shipped in cattle cars to the murderous death camps of the Nazi era.” The organization termed the event “a trivialization of the Holocaust and utterly contrary to authentic Jewish values.”

Rabbi Steven Pruzansky, a representative of the coalition, called the protest “offensive in so many ways that one loses count.” Rabbi Pruzansky charged that the event “maligns the targeted company and its employees, defames ICE agents, displays woeful ignorance of history, trivializes and distorts the Holocaust, and is a vulgar insult to six million murdered Jews and the survivors of that horror.”

Concluded Rabbi Pruzansky, “The fact that many of the protesters will be Jewish themselves merely makes it worse.”

Democrats Oppose Proposal to Disband ICE
On Oct. 14, protesters rallied against a new ICE office going up in Portland, Ore., chanting “Shut it down” and “Abolish ICE.”

Yet according to a Harvard Harris Poll, only 31 percent of those surveyed agreed that ICE should be disbanded, while 69 percent say it should not disbanded. Independents, who will be the key to the 2020 election, opposed the idea even more than the overall sample, with a towering 73 percent standing against the idea.

But most striking was that even among Democrats, fully 59 percent said ICE should not be disbanded.

Tensions within the Democratic coalition on radical open borders rhetoric and policies may be a distant early warning line of electoral trouble ahead for those who espouse them.

Christopher C. Hull holds a doctorate in government from Georgetown University. He is president of Issue Management Inc., senior fellow at Americans for Intelligence Reform, and author of “Grassroots Rules” (Stanford, 2007).