I pulled a box off the bookshelf in the bedroom that contained several notepads—accumulated over the years—in my never-ending quest for material for future missives. An entry in one of those notepads, long forgotten, is the topic of this missive.

Sometimes, the greatest packages of faith can come in the smallest of sizes; likewise, His most marvelous illustrations of grace can be hidden in surprising corners.

My encounter with a young girl named Brooklyn several years ago taught me that lesson.

I first saw Brooklyn at my nephew’s wedding at the First Baptist Church in Hindman, Kentucky. She was part of the wedding party. Brooklyn, then six years old, was the flower girl. She captured my attention at first sight; a tiny, barefoot princess dressed in a beautiful white gown, spreading flower petals on the church aisle between the pews. Her quiet voice announced to all the participants, “the bride is coming, the bride is coming.”

Brooklyn was perfect for the part. She was so beautiful, so young. She possessed a special dignity.

Only one thing seemed out of place. Brooklyn had no hair: a large, noticeable S-shaped scar decorated the back of her head, a reminder of the latest surgery to remove a brain tumor. Brooklyn—beautiful treasure for sure—on further observation was extremely frail and pale in color.

My heart went out to her at first glance.

I sensed, without knowing, that much of her early childhood had been spent in hospitals.

Brooklyn was Morgan’s daughter and Morgan, in turn, was a close friend of my oldest daughter during their high school days at The June Buchanan School (co-located with Alice Lloyd College in the tiny mountain hamlet of Pippa Passes, Kentucky). Brooklyn was the same age as Kimberly’s first child, (and my oldest granddaughter), Olivia.

At Kimberly’s request, I had prayed for Brooklyn from a distance (we lived outside Washington D.C. at the time). But none of those prayers—well-meaning as they were—adequately prepared me for my face-to-face encounter with Brooklyn. Nor, for that matter, was I prepared to encounter the God of grace, who’s heart aches for the Brooklyn’s in the world.

After the wedding I asked Morgan for permission to pray for Brooklyn. She nodded her agreement and I could see in her eyes the thought: so many have prayed, what could it hurt?

My opportunity came during the post-wedding reception held in the church’s basement. I noticed Brooklyn sitting by herself. She was digging into a plateful of food, no doubt exhausted from the ceremony and the picture-taking afterward.

I pulled up a folding chair next to her and, for a brief moment in time, the noise of everybody else in the room seemed to fade into a different dimension.

She turned her face toward me. I was captivated by her large eyes buried deep into a gaunt, porcelain doll-like face.

“Would you allow me to say a prayer for you?” I asked.

From her reaction, I knew she had been asked that question several times before. She was too polite to refuse. Her gaze bore straight to the core of my spiritual being.

“Why yes, you can pray for me,” she said with a voice drained of emotion. Her response was matter-of-fact, born of a track record, no doubt, of the disappointments of countless previous prayers—all well-intended—spoken over her in her young life. It was as though she was doing the people who prayed over her (including me I suppose) a favor: by praying for her, they could actually feel better about themselves. No matter thar the prayers were ineffective, but rather a process of massaging their own guilt.

For me, Brooklyn’s response was a discomfortingly adult reaction.

She was a child forced to confront physical challenges that would melt down most adults that I know.

Inside, I wanted to scream out, that this time would be different somehow—that my God actually heals! I muttered to her that I have had something happen similar to her experience in my own life. (Those of you who know me best know that I’m a colon-rectal cancer survivor: drastic surgery following radiation therapy and chemotherapy has left me with an ostomy bag for the rest of my life. What most of you don’t know is that at every doctor’s stop, through the multiple colonoscopies, I was absolutely convinced that God would heal me.).

And then I prayed for Brooklyn, I put my hand on the back of her frail shoulders and asked—with all the faith I could summon—for God to saturate her with His favor, to supernaturally heal her body, and to guide her future pathways.

I would like to say that the heavens opened up, ministering angels descended, and a chorus of angelic voices hovered immediately over Brooklyn’s frail frame.

None of that happened.

Rather, Brooklyn offered me a compassionate, understanding smile to reward me for my efforts. A meek “thank you” would have to suffice. She returned to eating her plate of food.

By all appearances, the prayer changed my world more than Brooklyn’s.

What is it in our human experience that causes us to confuse God’s grace and healing power with human pity? How many people have I interacted with over the years, who have had the spiritual fabric of their existence ripped apart (in some cases never to be fully mended) because their most urgent prayers were unanswered. At least the way they expected. Especially in the face of personal tragedies befalling children so young and innocent. For this reason, many of my friends have strayed far from the fold.

Indeed, one of the most difficult questions posed to those who sincerely set out to walk a path of faith is why bad—sometimes downright tragic—things happen to good people.

I have a lifetime of Brooklyn-like prayers. But I have also had several wonderful and immediate answers to prayer (including some of the readers of this missive). For years, I prayed—openly and unashamedly—for each of my college classes.

I think a lot these days about situations where an answer to my prayers didn’t seem to be immediately forthcoming.

Several years ago, as a result of the cancer I described above, I had to check in regularly with my oncologist on a regular basis for blood tests to make sure the cancer had not migrated to my liver. I remember getting off the elevator for one such visit when I noticed a woman in a wheelchair waiting at a doorway.

“How are you doing?” I asked her casually as I passed by.

(How often do we ask such questions as matters of social politeness, rarely waiting or caring enough to hear an answer).

The woman, an elderly Asian lady with a lifetime of experiences etched in the lines on her face, turned her empty and hopeless eyes in my direction. She wore a headscarf to over her baldness.

“I’m not doing well,” she muttered.

By the tone of her reply, I knew she was dying.

There we were, two strangers and a chance encounter in a cancer ward. Only God arranges such circumstances of time and place.

I didn’t know what happened to the person pushing her and the wheelchair. At the moment, she was alone.

“I’m so sorry,” I mumbled, “can I have the extraordinary privilege of praying for you?”

She nodded as huge tears—like a pent-up waterfall—started pouring down her cheeks.

I don’t remember the words I prayed over her that day.

I only know that there are nights when I wake up seeing her face.    And ask myself if I said the right words.

Even after all these years, I weep inside when I think of her.

Sometimes, you just don’t know what to pray. In my last missive, I mentioned a special stop during our trip to the Normandy beaches, Paris, Bastogne and Amsterdam. Rachel Mullinax asked me to say a prayer at the memorial site marking the place where, during the closing months of World War II, eleven Black soldiers were brutally massacred by the Nazis and buried near Wereth, Belgium. The site is forever etched in my memory: the trees and shrubs, the memorial grave markers in the makeshift graveyard, the wilting flowers, the bucolic Belgian countryside surrounding the site; grazing cows in a nearby field, and the large, elevated, slowly whirling blades of a modern countryside windmill.

There was also the human element. Larry and Marian—two members of our tour group—were particularly touched by the site. They had a personal link to the atrocity: the wife of one of the massacred soldiers (now deceased) worked for their family.[1] They were particularly fond of her.

How do you pray for eleven long-dead victims of such human cruelty? Or those relatives left behind?

What words can be a healing balm in such circumstances?

How can you convince yourself and others that the goodness of God somehow trumps such horrible deeds?

I could only trust in God to give me the right words.

I remember none of them. 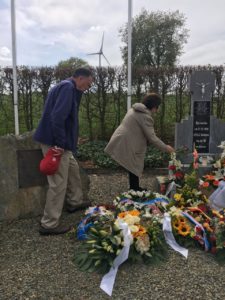 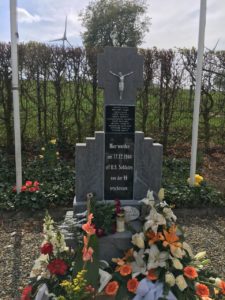 And what about Brooklyn?

When I started this missive, I called Kimberly (my oldest daughter) and asked her if she had any recent news about Brooklyn.

To tell the truth, I feared the worst.

“She is doing fine,” Kimberly said, “she still has no hair, but has graduated from high school and even played softball.”

[1] For more, see “Remembering the Battle of the Bulge,” ww2museumtours.org.