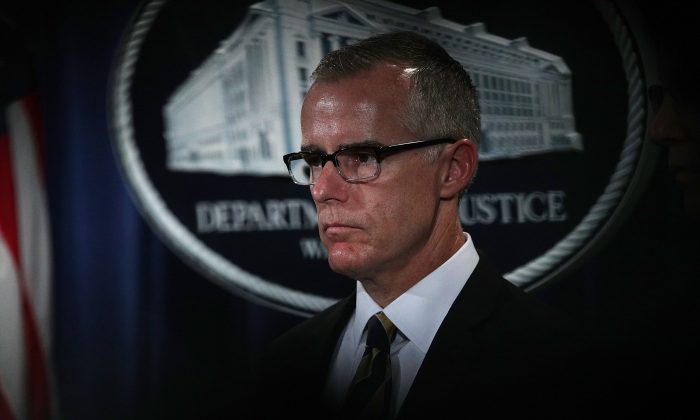 With apologies to Elizabeth Barrett Browning: How does former FBI official Andrew McCabe lie to thee?

Let me count the ways.

First through third, the Department of Justice (DOJ) Office of Inspector General (OIG) reported in February 2018, that McCabe three times “lacked candor” about an October 2016 leak. Moreover, the OIG found that McCabe approved that leak “to advance his personal interests at the expense of Department leadership.”

Thus, said the OIG, McCabe’s leak didn’t fall within a public-interest exception to the rule against such disclosure, which “constituted misconduct.”

Fourth, McCabe approved the leak in response to then-presidential candidate Trump, who had linked McCabe overseeing the Clinton exoneration to Clinton-connected contributions to his wife, Jill, a former Democratic state Senate candidate.

McCabe’s leak was intended to “rebut the notion that partisan bias affected the DOJ’s investigation of a possible pay-for-play scheme run by then-Secretary of State Hillary Clinton through her family charity, the Clinton Foundation.” The report that resulted “indicated the DOJ, led by then-Attorney General Loretta Lynch, constrained the FBI’s efforts to move forward with the investigation.”

Now, DOJ talking points said the answer to whether McCabe played any role in his wife’s campaign was, “No. Then-[Assistant Director] McCabe played no role, attended no events and did not participate in fundraising or support of any kind.”

Yet in June 2017, Circa reported that on social media, McCabe could be seen at an event wearing his wife’s campaign T-shirt.

According to 18 U.S. Code Section 1001, whoever “knowingly and willfully makes any materially false statement” in a matter within the jurisdiction of the executive branch can be imprisoned for up to five years, or worse.

Luckily for McCabe, apparently DOJ only prosecutes that crime against Trump supporters nowadays. Instead of serving time in prison, McCabe is on a book tour.

In an interview aired on Feb. 17, McCabe claimed, “I was fired because I opened an investigation into the president.” That’s strange, because Sessions fired him in March 2018, yet that investigation only became public in January.

Worse, in that interview, McCabe didn’t say he opened a new investigation. He said he directed his team to document “where are we and what steps do we need to take going forward” on the Russia “witch hunt” to put it on the most solid ground possible.

If he only ordered a review of existing investigations, how was he fired for opening one?

No. 6: When the interviewer asked what connection McCabe had to the Clinton email investigation at the time of Jill McCabe’s bid for office, he claimed, “none.”

According to Business Insider, that’s true, and Newsweek reported something similar.

But internal FBI talking points acknowledge that in the Clinton email investigation, “FBI Headquarters asked the Washington Field Office for personnel to conduct a special investigation. McCabe was serving as [assistant director] and provided personnel resources.”

So, no matter what mainstream media outlets claim, McCabe lied about that, too, either in writing the talking points, approving them, or dictating their content.

Finally, lie No. 7 is when McCabe said he “wasn’t willing to lie to keep” his job.

What should we do about McCabe’s lies?

As I’ve already argued, for newly confirmed Attorney General Robert Barr to merely reestablish lines of authority and make clear what the rules are has little long-term value.

The lesson so far: Democrats and DOJ/FBI bureaucrats can flout that authority and break those rules—and the law—and though they may be demoted, fired, have to resign, or lose an election, they won’t be charged, let alone convicted.

Therefore, first, Barr should begin to restore a semblance of balance to the DOJ and FBI.

They have every legal right to do that.

We have every legal right to point out that DOJ has become a partisan organization, prosecuting Republicans while holding Democrats and its own favored employees harmless.

Second, Barr should also open a grand jury investigation into the Clintons’ $132 million in questionable foreign contributions, including from Russian-linked sources; their aides’ potential destruction of evidence, including “breaking her phones in half or hitting them with a hammer”; and finally, potential DOJ and FBI malfeasance in covering all this up and facilitating spying on the Trump campaign.

Otherwise, McCabe will literally lie for the rest of his life.

After he’s gone, the 33 Democratic historians for every one Republican at elite universities will record whatever version of those lies is of most value to the left.

Begging Browning’s indulgence once more: McCabe shall but lie to thee better after death.