PUTIN HUMILIATES ERDOGAN WITH A STATUE OF CATHERINE THE GREAT 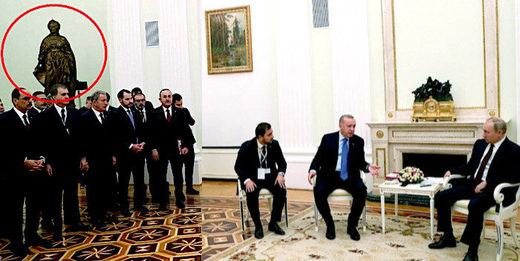 Translated from the Arabic by Barry Webb

A STATUE STEALS THE LIMELIGHT: THE DELEGATION ACCOMPANYING ERDOGAN STANDS BELOW THE RUSSIAN EMPRESS.

A statue that was placed on a pedestal in the meeting hall where the Turkish President Rejeb Tayyib Erdogan and his accompanying delegation gathered last Thursday to meet with the Russian President Vladimir Putin stole the limelight on social media sites.

Many of the twitter users commented on the placing of the statue of Catherine the second (Catherine the Great), who is considered to be one of the most famous Russian heroines who inflicted numerous defeats on the Ottoman state, noting that it was a subtle message. Some of the twitter users commented that Putin planned that as an insult to the Turkish delegation in spite of the fact that the goal of the meeting was to get an agreement between the two sides regarding the Syrian province of Idlib.

So, the photos of the meeting show the Turkish delegation below the statue which they say is of Catherine the second who defeated the Ottomans in several battles which resulted in the signing of the treaty of Kinjariyyah, towards the end of the 18th century, with the declining Ottoman authority.

However, the statue of Catherine and the Russian delegation (sic; probably meant to say “Turkish delegation”) were not the only items that elicited comments on the social media sites, because the Russian ministry of Foreign Affairs itself also raised some questions days before the meeting when it published on its Facebook page an article about the wars between Russia and the Ottoman state between 1877 and 1878.

It is noted that Catherine the second was also known as Catherine the Great as she was one of the most prominent, most important, and greatest of Russian rulers throughout history. She also ruled longer than any other woman since her reign lasted from 1762 until her death in 1796 when her age was about 67.

Catherine the Great’s reign was considered to be the “golden age of Russia.” While her predecessor Peter the Great made enough reforms to convert Russia from a backwater medieval entity into a great power of Europe, it was Catherine, an avid admirer of the European enlightenment who truly modernized Russia and won back from the Ottoman Turks the sacred lands of Crimea and the Ukraine, use of the Azoz sea, the Black Sea, and forced the Sultan to recognize Russia as the protector of all Orthodox Christians in the Ottoman realm.

In the process, Russia, during Catherine’s rule, inflicted some of the heaviest defeats ever suffered by the Ottoman Empire–which is why Putin’s choice of her statue held special significance for the Turkish delegation. And, it does appear that the message was received. During the photo-op final speeches at the conclusion of the summit, Erdogan did not look like a happy camper.

Unfortunately, many of the gains made by Catherine were lost in the early 19th century when Napoleon invaded Russia and burned Moscow. Catherine’s successors then had to win back these gains through a series of Russo-Turkish wars during the last half of the 19th century. The 1877-1878 war resulted in Russia not only being recognized once again as the “protector of all Orthodox Christians,” Russia also demanded, and obtained the provision, that church bells once again be allowed to ring throughout all of the territories of the Ottoman Empire including Istanbul, which they did as soon as the results of the treaty made their rounds–in violation of Islamic law.

When apologists talk about how “tolerant” Islamic Empires were, our policy makers must remember that these rare examples of “toleration” were usually forced upon the Islamic polities by outside powers.

Another take away from Russo-Turkish history is that whenever Russia is in a position to put Turkey out of the rest of humanity’s misery, some western power always steps in to save the Turkish Islamists. After Napoleon’s disastrous Russian campaign, it was the British, who in the 1850s actually sent troops to aid the Sultan against Russia’s attempts to reclaim Constantinople for Orthodox Christianity. This resulted in a stalemate in the so-called “Crimean war.”

During the 1877-1878 war it was once again the British, this time, not with troops, but with “diplomacy” (accompanied, no doubt, by the threat of force), who saved the decrepit empire from total collapse, although, the Russians did get the Crimea back. After the British it was the Germans (though unsuccessfully with the WWI loss), and now in the 21st century, the neo-Ottoman Sultan Erdogan is using his NATO membership as a security blanket for his reconquest of previous Ottoman territories–while Russia once again acts as the counter-weight.

One final note about Catherine the Great specially for Americans. She received the news of the 13 colonies’ rebellion against the British with pleasure, and when the British crown requested 20,000 troops from the Russian crown and a formal alliance, Catherine refused. Then again, when Spain entered the war on the side of the Americans, Britain again requested an alliance and naval support to help enforce the blockade. Again, Catherine refused, and instead formed with other European Powers not currently involved in the war the “First League of Armed Neutrality” in 1780 which stipulated that the ships of “neutral” nations can freely enter the ports of belligerent nations, except for those which were actively blocked by naval forces. This effectively neutralized Britain’s blockade, and helped make American independence possible.