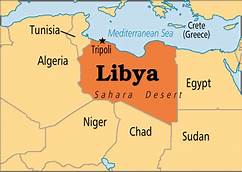 The head of the Libyan parliament in exile in the eastern Libyan city of Tabruk, ‘Aqeela Salih, visited Egypt on 12 January and delivered a speech to the Egyptian Parliament. During his speech, after lambasting Turkey’s moves in Libya, he formally requested the Egyptian army to intervene if “any foreign nation” (i.e. Turkey) intervenes. This request was met with a thunderous standing ovation, indicating a shift in Egyptian attitudes from that of providing aid from a distance (while pretending to not be intervening) to one of favoring direct military intervention to keep the Turks out.

At the same time the military forces of General Haftar, who supports and is supported by the Tabruk parliament, reportedly signed a Putin-sponsored “cease fire” agreement with the Tripoli government of Fayez Sirraaj, after which, the two sides were supposed to negotiate a final settlement. This truce was a result of Erdogan’s visit to Putin and Putin’s attendance at a conference with Merkel.

This “cease fire” truce provided Erdogan with a face saving way to pull out of Libya if he wants to (after being politically rebuffed by both Tunisia and Algeria), or an opportunity to rearm and reinforce his Muslim Brotherhood ally in Tripoli to further his imperial designs. Middle East analysts doubted whether this truce will hold.

The “truce” didn’t last even 24 hours. International pressure continued, though, to call for a truce so General Haftar submitted a list of conditions that must be met before a truce could be possible. These conditions included the disarming of all militias (which constitute the entire military forces and allies of Sirraaj’s Tripoli government). This in turn was rejected by Sirraaj and his Turkish master, Erdogan.

January 15th news has Haftar returning from Moscow to Libya without a signed deal.

On January 13th, the Saudi-owned al-arabiyya TV program Panorama interviewed a Libyan ex-pat currently in Beirut who was billed as an expert on Libyan affairs. This individual said that the terms being suggested by Tripoli and Turkey could never be accepted by the Libyan National Army (LNA), which is headed by Haftar. He claimed that the LNA has gained control over 65% of Libyan territory which they won through lots of bloodshed and hard work, and for them to be expected to give it back is ridiculous. “There is no way that the LNA will retreat when the militias will not disarm.”

On the 15th of January, al-arabiyya TV and www.alarabiya.net quoted a report from Britain’s Telegraph that Turkey has recently sent 2,000 additional fighters from Syria to Libya to support the Muslim Brotherhood Tripoli government. These mercenaries are trained by Turkey, paid $2,000.00 a month (a good sum for those from a broken country like Syria with no functioning economy), and are promised Turkish citizenship.

The Lebanese TV station al-mustaqbil (the Future) has been airing eulogies almost every night for the late Lebanese Prime Minister Rafiq Hariri. Some of these programs feature interviews with notables who knew him way back when, along with photos and film clips of some of his accomplishments. Other programs feature symphony-like orchestras with vocal accompaniment playing traditional Lebanese music. In between the musical productions, an attractive young lady recites (with piano accompaniment) eulogies about Rafiq Hariri, telling about the dreams he had for Lebanon.

Readers may wonder why a website like this, dedicated to current events as related to American national security, would be so interested in Lebanese TV programs eulogizing a Lebanese Prime Minister who served as PM from 1992 to 1998, and again from 2000 to 2004? And why is this figure so important that a Lebanese TV station in 2020 would air, almost nightly eulogies for a long gone Prime Minister?–and more specifically why did this programming suddenly begin appearing in the fall of 2019?

The answer to all three questions is the same. But to understand the significance, a little history of Rafiq Hariri is in order. He was born in Lebanon in 1944, but as an adult moved to Saudi Arabia to participate as a contractor in the Arabian oil boom of the 60s, 70s, and 80s. Building things for the Saudis who were throwing vast amounts of their oil windfalls on trying to modernize their country made Mr. Hariri a multi billionaire.

After returning to his native Lebanon with dual Saudi and Lebanese citizenship he used some of his billions to help rebuild his home country after the devastating Lebanese civil war 1975-1990. During his first tenure as Prime Minister in the 90s, he concocted a scheme with the Saudis to solve the Israeli-Palestinian problem for good by throwing so much money at it that the Palestinian issue would disappear from the Middle East arena.
This scheme was revisited during his second term as PM in the early 2000s.

It was for that reason that he was assassinated in 2004 by Hizbollah. If there is no more Palestinian problem, and there is, instead, a general Arab-Israeli peace with mutual recognition, then Hizbollah no longer has an excuse to hang on to its role within the Lebanese political sphere as a legitimate armed militia “resisting Israeli aggression.”
Hizbollah, of course, took out Rafiq Hariri under orders from Iran and Qasim Solaimani.

Therefore, a Lebanese TV station by playing almost nightly eulogies of Rafiq Hariri is making a silent, yet in-the-face protest against Iranian domination of Lebanese politics and against Iran’s puppet militia Hizbollah . . . at the same time that the non-Shi’a residents of Lebanon have taken to the streets to more physically protest the Iranian hegemony.

Over the weekend the Iranian-supported and Iranian-directed heshd ash-sha’bi (popular mobilization) Iraqi-shi’a militia groups launched missiles into military bases where Americans are stationed. No Americans were killed, but several Iraqi servicemen were.

This sort of attack is in line with Iran’s threats that their “revenge” for our taking out the late al-quds force leader Qasim Solaimani, will continue for some time. Their stated policy going forward is to not attack Americans directly, but to use their militia groups and terror cells in countries that host American military units against those host countries. The idea being that even if they fail to kill Americans, they can cause pain and disruption to these host countries which will then cause them to expel the Americans for their own safety. This policy has already worked in Iraq with the Iraqi government passing a bill demanding that all foreign forces leave the country.

With the Americans gone, Iran will be free to dominate Iraqi politics through their local Iraqi Shi’a militias, and their bribery of Iraqi Shi’a politicians.

The above-mentioned missile attack against military bases in Iraq could also be a result of the new commander of the IRGC’s al-quds force, Ismail Qaani, doing a little muscle flexing to show their allies around the Middle East that the al-quds force still “has it.”

However, there are signs that the effort may have failed in its purpose. www.alarabiya.net is reporting a rumor that the leaders of the Iranian-supported militia groups in Iraq are “fleeing” their positions out of fear they’ll receive the “Solaimani treatment.”

The proposed departure of “all” foreign troops from Iraqi soil, means NATO, and primarily American forces. This will leave Iraq totally helpless before Iran on the one side and a revived ISIS on the other. While Iran does not maintain boots on the ground in Iraq, they can still dominate Iraqi affairs through their armed militias on the one hand, and their “ownership” (through bribes, payoffs, and physical threats) of most, if not all, of the majority Shi’a members of the Iraqi parliament.

From almost the day that Bush invaded Iraq back in 2003, I have been predicting that no matter how much money and troops we poured into that country demographics and history have destined it to break up into its three constituent parts: A Shi’a state in the south, a Kurdish state in the north, and an Arab Sunni state in the west.

Ironically or not, this geographical division roughly corresponds with the ethnic divisions of the world’s earliest civilizations in Mesopotamia where the Sumerians and later the Khaldeans, dominated in the marshy south, the Assyrians dominated in the north mostly along the Tigris river and into the mountains of eastern Anatolia from where both the Tigris and the Euphrates originate. From the west came the Amorites out of Syria and from 1900 B.C. on they made Babylon the capital of their new kingdom and were henceforth known as “Babylonians.” These Semitic speakers dominated the area from Babylon west to the foothills of eastern Anatolia. This region roughly corresponds to today’s Anbar province.

Over time, as the Shi’a populations have outpaced the other segments, Baghdad has become more Shi’a than Sunni, but go just west of the capital and you enter the Sunni Arab regions. So, the old, ancient geographic divisions of Iraq remain, and are still based on ethnic differences, though the ethnicities have changed over time.

Significantly, when the Shi’a-dominated Iraqi parliament voted to expel the American forces from Iraq, the Kurd and Sunni Arab representatives boycotted the meeting, signaling possibly a first step in the future de facto political division of Iraq into three independent countries.

Trudeau under fire over gun and cocaine laws

The McFiles with guest Brad Johnson

Sunday Coffee with Jeemes: Why I love art